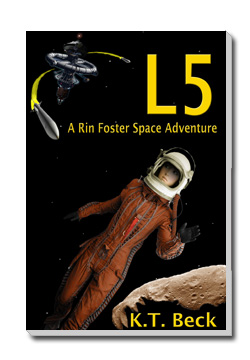 L5 is available on Amazon in both paperback and ebook formats.

The Moon and Mars have been successfully colonized; interplanetary travel among the many outpost stations in the Inner System is routine. Relations between the government of Earth and the settlers of the Moon grow increasingly strained as the “Lunies” yearn for independence. Detection of the Ragnarok Cluster, a tumbling stampede of space junk on a direct collision course with Earth, necessitates the construction of the LaGrange Five Station, L5, as a permanent home for the defensive missiles to guard against this and future cometary disasters.

The charismatic and violently unstable politician Minister Alexis, leader of the fanatical Lunar Separatist Movement, sees L5 as more than just a missile defense system, but as a military threat in the sky over Luna. He executes a clever plan to commandeer the brand-new station on the day of the first missile firings.

Alexis and his team of well-trained terrorists take the station, murdering several of its crew and gaining control of the dozens of high-megaton nuclear missiles. They change the course of the missiles meant to destroy the Ragnarok Cluster, aiming them instead at Earth’s upper atmosphere. Minister Alexis’ demands are simple – he will maintain control of the sky over Earth with his new arsenal and wrest control of the Moon away from Earth’s corrupt government.

Earth’s only hope lies in a very unlikely quarter – Lt. Rin Foster, a Space Marine commanding a crew of convicts, some from the Moon, some from Earth, riding a man-made asteroid in from the Belt, happens to be in close proximity to L5. Foster, a young lieutenant eager to clean up some blemishes on her record, is given no choice in the matter. The Earth government overrides her control of her rock’s thrusters, sending the asteroid toward the station as a decoy so shuttles full of soldiers can mount an assault from a different direction. The terrorists launch one of their asteroid-busting bombs at Foster’s rock and then turn their attention to the military assault, ultimately defeating it.

But Foster thinks fast and comes up with a plan. She and her crew of ten convicts survive the explosion. Asteroid shattered into pieces, suits low on oxygen, equipment battered, men and women with little or no hope, they emerge as Earth’s only chance to remove the terrorists’ fingers from the launch buttons on L5.

Separated by the blast, Foster and her desperate convicts each must find their own way into L5, and once in, defeat the terrorists. Each must face their own enemies, their own challenges. Many secrets are revealed, including the fact that the arrival of their asteroid at the right time and place was no coincidence, and that one of Rin’s crew is a traitor. The battles inside and outside the station become more and more personal, testing loyalties and emotions that run far deeper than homelands and flags.

L5 is available on Amazon in both paperback and ebook formats.