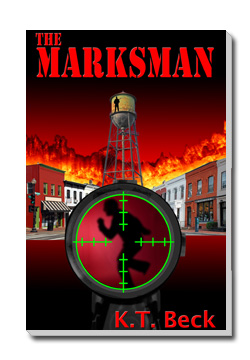 The Marksman is available on Amazon in both paperback and ebook formats.

When Chris Jordan enlisted in the Marine Corps fresh out of high school (shortly after the death of his father) he was a just another normal recruit until that day on the firing range, the day he discovered his rare skill. Firearms almost automatically became extensions of his will — he is the perfect marksman. His astonishing shooting comes to the attention of Colonel D.W. Hollister, a thoroughly corrupt Executive Branch aide who trains Chris for a series of unsanctioned covert missions. Innocent, easily manipulated, Chris finds himself in the jungles of Central America, working with Jerry Wilkers, a gruff backwoodsman born and raised in the Rockies, as an assassination team. Making a virtually impossible shot, they assassinate a vicious drug cartel enforcer.

Almost immediately, Chris and Jerry enter Lebanon undercover to shoot Ibn Saud, the worst killer that Mideast terrorism has ever produced. After completing that grim task, both men rebel against Colonel Hollister, demanding an end to his illegal “wet” missions.

Hollister reluctantly agrees to fold their operations. Chris, having recently inherited his grandmother’s house, the house where his father grew up, leaves for Hawthorne, Iowa (population 900). He desires only peace, isolation and escape from his immediate past.

But Chris soon learns that the tree-lined streets of Hawthorne hide their own secrets, their own dangers. He becomes involved with Mary Taggart, a sexy waitress whose sometime boyfriend Charlie Morgan carries a deep resentment against Chris and Chris’s dead father.

And Chris’s past is not easily left behind. The supposedly dead Ibn Saud inexplicably surfaces, most assuredly alive, and seeking a grim vengeance. Leaving a trail of fresh corpses in his wake, he follows the traces left by Chris, Jerry and Captain Peter Jamison, their team leader in Beirut.

Hollister, his covert network collapsing around him, sees a wild chance to kill all of his stray birds with one stone. He begins to leave clues for Ibn to follow, clues that will lead the terrorist to Chris Jordan.

Jerry Wilkers and Peter Jamison race to save Chris. Hollister uses Charlie Morgan as a cover for himself and two more of his assassins as they wait for Ibn to arrive. Meanwhile, Ibn, aware that he is being lead into a trap, outwits Hollister and brings his own brand of warfare to the small town.

Chris Jordan was searching for peace when he fled to Hawthorne, but like all soldiers in all wars, he brought a sliver of the horror back with him. The evils that haunt him, both real and imagined, will meet in Hawthorne in a cataclysm of violence and revelation, of corruption and heroism, and Chris will face the one final ghost that will give him either a chance for redemption or the peace of the grave.

The Marksman is available on Amazon in both paperback and ebook formats.